Chaos as wife’s ex-lover buys her a car, husband demands she returns it

A woman who finds herself in a great dilemma and is calling on social media users to come to her aid.

Her post on the popular Facebook group called Tell It Moms had her sharing that there was a particular car she dreamt of owning one day and most people around her could testify to it.

“I have always wanted to buy a particular car but because we were budgeting I kept putting it off. Everyone who knows me knows how long I have been dreaming about this car.”

She had the financial means to make that purchase but her husband for years refused to allow her get it for herself.

“We are comformable financially but my husband is still tight fisted with cash so for peace sake I never bought it even though I could comfortably afford it.”

Betty Mensah a certified marriage counsellor in an interview with a popular Ghanaian website called YEN.com.gh commented on the husband’s reluctance to allow his wife keep a car;

“It’s a good thing that the lady’s husband is conscious about money usage but he needs to relax a bit given that the lady is not just making an impulse purchase. She has the means and has probably saved up towards getting the car for a while. The man needs to support his wife on this and not be too hard hearted.

Life is for the living. One of the reasons for taking up a job and being committed to it is to be able to afford some things and he shouldn’t prevent that from happening.”

On her 40th birthday, however, her former boyfriend surprised her with the car because of a promise he made her years ago.

“I received the car in my compound. I honestly thought it was from my husband, saa na it wasn’t. It took me some time to figure out that it was from my ex. He promised when we were dating that when he made money he will buy me this car.”

Her husband is now asking her to return the car and she does not know what to do. The young woman is asking netizens to help her figure out what to do.

Madam Betty shared a piece of advice with the wife: “It is advisable for the lady to return the car. Her former boyfriend meant well and had good intentions but I understand why her husband would be displeased with it

For the sake of peace and the love she has for her husband, the car must go”. 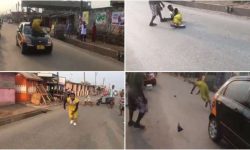