Habeeb Okikiola (born March 12, 1994) is the newest face in the Nigerian indigenous rap scene. The Yoruba-born rapper, singer and songwriter is known in the industry by the moniker, Portable Omolalomi.

The Street talented Artiste Portable Popularly Known as Omolalomi aka son of Shaku Shaku aka Street Problem, aka Wahala Musician Is the new trending Nigerian Artist with Several hit single.

Father of 1 son who is 27 years of age, hails from Ogun state and go by the real names Habeeb Okikiola and is also known as Yaromaiswag .

The self-styled Son Of Shaku Shaku, Street Problem and Wahala Musician, has joined the league of fast-rising artists in the country.

Portable Omolalomi was born on the 12th of March 1994 in the ancient city of Abeokuta. A week after his birth, he was named Habeeb Okikiola. A native of Ogun State in southwest Nigeria, he was born to the Yoruba family of Mr. and Mrs. Okikiola.

Portable Omolalomi and his siblings were raised in Abeokuta city by their parents and adhered to the Muslim faith just like their father and mother. Growing up in Abeokuta meant that Portable Omolalomi became well versed in the Yoruba language from an early age, as it was the medium by which he communicated with his parents, friends in school and in the neighborhood, and extended family members.

While he was still in elementary school, he became influenced by rap songs by American artists such as Dr. Dre, Tupac Shakur, The Notorious B.I.G and Snoop Dogg, which he listened via his father’s audio cassette player. He admired these artists and started composing rap songs whenever he felt inspired to do so.

However, with the rise of indigenous rap artists like Lord Of Ajasa, Dagrin, Danny Young, Olamide, QDot, CDQ, he decided to switch to Yoruba rap, and he was motivated to become a professional musician.

Recognizing the fact that he had a better chance of succeeding in the industry if he was at the center of it, Portable Omolalomi decided to move his residence to Lagos State, the music capital of Africa.

While Portable Omolalomi was in Lagos, he sought out producers he could work with, as he composed new rap songs on a regular basis. However, he still maintained a 9-5 job as an artisan in the mainland part of Lagos to pay his bills.

Despite recording a couple of songs that did poorly commercially, Portable Omolalomi was undeterred in his dream of becoming an A-list artist in the industry.

However, Portable has been in the music industry for 10 years before his final break through and proper recognition from top singers like Olamide.

Portable was introduced to Olamide by Poco Lee who showed him a video of him and immediately, Olamide picked interest and called up to make a song the next day.

The Zazooo is the Trending Street Slang Now, rocking December 2021 and obviously the New Year ( 2022 ).

Portable Omolalomi is 27 years old as of today. He resided in the Mainland part of Lagos before but recently moved to the island – Lekki. He lives in a spacious apartment in a high-rise neighborhood in Lekki.

Though he is yet to unveil her identity to the public, he is currently in a serious relationship with a beautiful young lady. He visits Ogun State from time to time to see his parents and siblings.

Portable Omolalomi‘s success as a musician means that he constantly receives invitations to perform at music shows and concerts in the country. 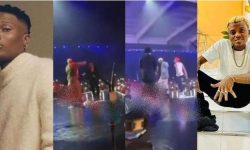