An amateur football player, Christopher Edoghogho, has slumped and died in Benin City, Edo state during a football match between his club, Angels Football Academy and BJ Foundation Football Club in the ongoing Federation Cup.

It was reported that Edoghogho suddenly collapsed after heading the ball just two minutes into the match at the School Of Health Technology Football Pitch and was subsequently rushed to the Edo Specialist Hospital, Benin where he was declared dead.

One of his teammates, Okiemute Ovie, while speaking to journalists said it was a normal and smooth start into the game but everything changed for the worse when Edoghogho headed the ball and suddenly slumped on the field.

According to him, everybody thought it was just a normal fall at first but the referee called for the medical team when they noticed the situation was becoming more critical.

“The game was on when Chris headed the ball to the centre cycle and went down about two minutes after then. We all thought it was one of the normal fallings that do happen on the pitch. While they were checking, the referee signalled the medical team and they came in and rushed him away.” he explained.

Ovie further stated that while they were awaiting update on the condition of Edoghogho, the organizers of the competition suggested the game should continue but his teammates rushed and rushed to the hospital, where they met the lifeless body of their colleague right inside the ambulance. 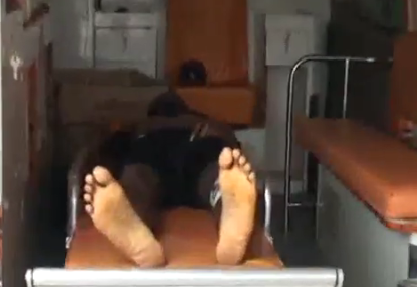 “We demanded to know what happened to our colleague but nobody was ready to talk to us. Until now, none of the members of the organizer of the tournament is here. It is over four hours since the incident happened.” he added.

The incident was confirmed by an official of the ministry, stating that the organizers will brief the press at the appropriate time.