On 11th April 2017, Anambra State under the visioner governor, His Excellency, Chief Willie Maduabuchukwu Obiano launched the Umueri International Cargo Airport project. It was a noble dream which few thought will not become real.

However in his usual self, the governor decided not to follow where the path will lead but where there is no path so that he will create a new path today. As a pragmatic leader, the governor set out to navigate his way by moonlight so that he sees the dawn before the rest of us.

Four years on, a test flight is scheduled today, marking the first operation at the new airport using a commercial aircraft by Air Peace.

According to the governor, the ‘Airport City Project’ will be developed on a 1500 acre site and will feature two runways, an aviation fuel facility, aircraft maintenance facility, airport hotel, business park and international convention centre. The project is expected to generate 1200 direct and 3600 indirect jobs.

The actions of Governor Obiano has created a legacy that inspires others to dream more, learn more, do more and become more; in the words of Dolly Parton, he is an ‘excellent leader’. Peter Strople’s assertion that legacy is not leaving something for people, but leaving something in people is true to the vision of Anambra State governor.

His Excellency, Chief Willie Maduabuchukwu Obiano will leave behind a project engraved in stone monuments and above all, woven into the lives of his people.

In a pre-inauguration tour of the airport, conducted by the governor, the inventiveness of the new Anambra airport caught all the dignitries enthralling throughout the exhibition tour. Among the dignitaries at the tour were His Majesty Igwe Nnaemeka Alfred Ugochukwu Achebe (The Obi of Onitsha), Members of the State cabinet, His Lordship, Most Rev. Felix Femi Ajakaye (Bishop of Catholic Diocese of Ado Ekiti), Rev. Fr. Ejike Mbaka C. (Adoration Ministry, Enugu), Cllr. Ernest Ezeajughi (Mayor of London Borough of Brent), Ambassador Elijah Onyeagba (Nigerian Ambassador to Burundi) and other distinguished guests.

Then, there was disclossure of some details in the construction including the state-of-the-art run way, first to non in Nigeria. The runway which comprises of two razers is the longest runway in Africa with about 5.7 kilometers. The uniqueness of the runway is that aircrafts can land from two sides of the runway . It will be proven today as the two test flights will land from two sides.

Anambra International Cargo/Passenger airport has acquired the most recent fire truck. The extraordinary airport tower is a unique landmark on its own, embedded with artificial intelligence technology. Engr. Marcel Ifejiofor (Anambra State Commissioner for Works) took time to enumerate other technical facilities that has scored the airport the best among her peers.

First aircraft have landed on the Anambra International Cargo and Passenger Airport in Umueri community, Anambra East Local Government Area of the state. The aircraft are are owned by Air Peace.

The first one marked 5N-BUJ landed at exactly 2:25pm while the second one landed at about 2:45pm.
That was the inaugural flight on the new airport. 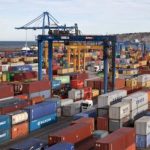