Sheggz and Bella look like they are on their way to beginning a possible romance in the House! Last night while getting cozy in bed, Sheggz called Bella beautiful, and shot his shot. In not so many words, Sheggz admitted he is interested in her, but confessed he needs Bella to show him she is open to his advances. “If a girl says to me she’s not down, I won’t go hard. It’s different when someone says hmmm, let me see. It’s enough to think she’s considering it. The woman has to give the man something to hold on to,” he said as the two reclined in bed.

In response, Bella told him it was a little too early for that conversation. “I’m not ready to do that in this House. You do realise that this is the third day? Also i’m not easy”. Sheggz told her he was well aware of this fact – and insisted that’s the kind of woman he likes; a woman that’s hard to get. Bella didn’t seem to shut Sheggz down and seemed to enjoy their conversation.

Cards on the table 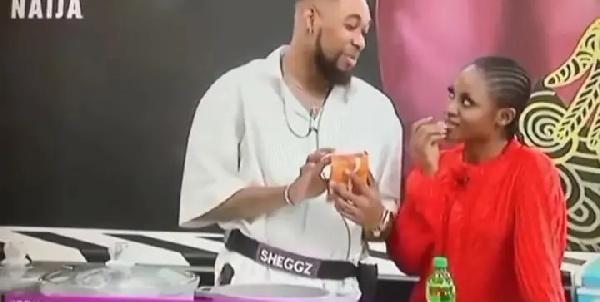 Today, the pair have been inseparable; they showed up in the Lounge area in unplanned colour coordinated outfits, held hands, and flirted, while their fellow Level 1 Housemates prepared breakfast in the background.

In the Level 2 House, Groovy and Beauty’s ship seems to be sailing smoothly even after Groovy refused to kiss her. There was almost a roadblock though, as Amaka revealed (playfully) to Pharmsavi this morning that she had planned to scatter this union, until Beauty showed up in lingerie. Pharmsavi couldn’t believe his ears and laughed to his hearts content at this funny revelation.

Sheggz and Bella are not the only ones shooting their shot in the Level 1 House. In the Bedroom, Allysyn and Hermes admitted to liking each other. Allysyn said she likes Hermes because he is intelligent, and though they have a lot of differences, they also have a few similarities. Allysyn wants to get to know him even though she is emotionally unavailable at the moment. Hermes informed her about being polyamorous, and she asked him if he wanted to have three girlfriends. Hermes couldn’t make any promises, but he sees Allysn as a ‘free spirit,’ and to him, love means “giving and making an effort to another human’s effort”.

Speaking of Allysyn, some of you have noted she may be into Adekunle?

Allysyn do you know your friend Doyin like Adekunle? 👀 #BBNaija

Which ship do you think will set sail, #BBNaija fam?