Saturday Vanguard learnt authoritatively that the former governor was picked up by EFCC operatives to enable him to account for public funds amounting to N42 billion.

The huge amount, we gathered, was allegedly mismanaged by the former governor from security votes and funds meant for the now rested Federal Government-funded Subsidy Reinvestment Programme aka SURE-P.

The information came just as Saturday Vanguard was briefed on how the ex-governor was arrested by the operatives of the DSS and handed over to the EFCC on Thursday night while trying to leave Nigeria.

A top source in EFCC said the former governor allegedly diverted N37 billion from security votes and another N5 billion from the SURE-P purse.

The source claimed that the former governor used part of the N37 billion to finance political events in the state and should account for the public funds.

Saturday Vanguard had reported exclusively late last year that a Southeast governor had given out $4 million to a top INEC official to compromise the Anambra election but it could not be established at the time who the governor in question was.

Saturday Vanguard learnt exclusively that the former governor was stopped from boarding a Delta Airlines flight to the United States of America at the Murtala Muhammed International Airport in Lagos by the operatives of the Department of State Services about 8:30Pm on Thursday, having been flagged by the Nigerian Immigration Service, NIS.

Reliable security officials who were involved in the operations that led to Obiano’s arrest, confirmed to Saturday Vanguard that the former governor, who tried to be smarter than the security operatives, were however outsmarted and taken into EFCC custody that night due to their efficient coordination.

According to one of the officials, who spoke to Saturday Vanguard in confidence, Chief Obiano, who had been placed on EFCC’s watch list since November last year, actually plotted to escape from the country as soon as he handed over the reins of power to Dr. Charles Soludo on Thursday morning.

“The former governor had schemed effectively to escape to the United State with the positioning of a private jet at the Anambra International Airport to ferry him away from the state shortly after handing over to the new governor,” a reliable source close to the state, said.

“But unknown to the former governor, security operatives had also been monitoring the private jet and his movements from the Awka Airport up to his arrival at the Murtala Mohammed International Airport in Lagos.

“The truth is that as soon as the private jet conveying Obiano and his wife, left Awka for Lagos, a coordinated alert was triggered to the relevant security agencies to be on the watch out for the former governor.

“Chief Obiano, who was billed to fly direct to the U.S with his wife on a Delta Airlines flight that night, was however stopped from flying and the airline promptly notified of his unavailability to fly so as not to unduly delay the international flight.

The arrest and handing over of the former governor to the EFCC, Saturday Vanguard learnt, was seamless due to the earlier notification given the NIS by the EFCC to be on the lookout for the ex-governor as he might want to flee the country at the end of his tenure.

When asked to confirm the involvement of the DSS in the arrest of the former Anambra chief executive, the Spokesman for the DSS, Dr. Peter Afunanya, declined to confirm, pointing out however that it was not unusual for security agencies to collaborate for the success of certain security operations. 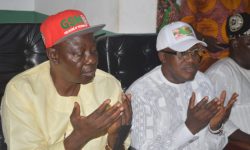