Liquorose emerged as the week nine Head of House in Season 6 after Emmanuel chose her as the HOH with the veto.

Biggie on Monday brought new rules for the ultimate veto power game that there would be no head house, and the winner of the veto power will decide who the next head of house will be for week 9.

Biggie set up the arena for a game, and the winner of the challenge wins the Ultimate Veto Power and gets the ability to save and replace a nominated housemate even if they were the ones that had been nominated for possible eviction in week 9.

It was a battle between the housemates, but Emmanuel won the task, which gave the housemate a place in the finale of the reality TV show.

The Week 9 Head of House in BBNaija Shine Ya Eye 2021 is Liquorose, Liquorose, and Cross are the only housemates with access to the HoH luxury lounge in Week nine of the reality TV show. 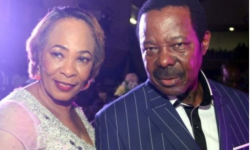 #BBNaija: “You’re So Special To Me, I’ll Wait Till After The House Before Any S€xual Activity”- Sheggz Tells Bella (VIDEO)

#BBNajiaS7: Chomzy reveals how she will punish Beauty when they meet (Video)

#BBNajiaS7: Sheggz opens up on his relationship with Beauty, Bella react (Video)