As the All Progressives Congress, APC conducts its governorship primary election in Osun state today, the battle to get the party’s ticket seems to have become a proxy war between a political son and his godfather. Although three combatants; incumbent Governor, Mr Adegboyega Oyetola, former Secretary to the State Government, Alhaji Moshood Adeoti and former Deputy Speaker, House of Representatives, Hon Lasun Yusuf are on the ballot, the election seems to be a platform for former Governor Rauf Aregbesola to settle scores with his erstwhile godfather, Asiwaju Bola Tinubu.

While Aregbesola is in support of Adeoti with whom he parted ways in 2018, Oyetola appears to be a victim of circumstances. His tenure as governor falls within the period of war between his predecessor and Asiwaju Bola Tinubu, who incidentally is the political godfather to the two gladiators.

How the aspirants stand

Lasun Yusuf is the immediate past Deputy Speaker of the House of Representatives, whose insistence on succeeding Aregbesola in 2018 cost him his ticket to return to the Green Chamber. After the 2018 governorship election, he went underground but resurfaced last year as politicking towards the 2022 governorship election commenced.

Lasun does not have any political support from any leader or group(s). The former lawmaker seems to be alone on his political journey. Even most of his aides have jumped ship with many of them pitching their tent with the incumbent Governor.

Lasun had at one time or the other hobnobbed with both Ileri-Oluwa faction and The Osun Progressives, TOP, faction loyal to the Minister of Interior, Ogbeni Rauf Aregbesola, but he seemed not to be comfortable with either of the groups. Findings showed that the former speaker may want to return to the lawmaking chamber.

Lasun’s greatest albatross is that he hailed from the same Senatorial District as the incumbent governor, where the governor’s support base is very strong. The majority of party chieftains from the area are not with the former Deputy Speaker.

Moshood Adeoti, the former Secretary to the State Government under Aregbesola and Governorship candidate of the Action Democratic Party, ADP, during the 2018 election is the preferred candidate of the Minister of Interior. He is from Osun West Senatorial District, where the factional APC Chairman, Rasaq Salinsile hailed from, a grassroots politician in all ramifications. However, his sojourn to the Action Democratic Party in 2018 in a bid to succeed Aregbesola against the party establishment diminished his goodwill within the party.

Prior to his appointment as the Secretary to the State Government, he held office as Chairman, Iwo Local Government Area and Chairman of Alliance for Democracy, AD before it metamorphosed into Action Congress of Nigeria, ACN. Adeoti has in place, a solid structure across the wards in the state.

However, since former Governor Aregbesola discovered his ambition to become governor in 2018, his structures were strategically dealt with and his influence diminished within the party. His association with Ogbeni Aregbesola, according to some party members, was to spite the sitting governor. His choice as the preferred candidate of the faction almost created division within the group, as many members ordinarily thought former Speaker of Osun State House of Assembly, Najeem Salaam would pick the group’s nomination form. A major setback for Adeoti is that many of the party chieftains that identified with the “West Agenda” in 2018 have all pitched their tents with the incumbent governor.

The incumbent Governor, Adegboyega Oyetola, from Osun Central Senatorial District, in line with the convention, has the right of first refusal over his second term ambition. In fact, residents of the state were surprised with the present development, believing that the governor, like his predecessor, should be allowed to complete his two terms.

Oyetola presently enjoyed the support of party leaders across the state including the likes of Chief Bisi Akande, the elder’s caucus, majority of elected lawmakers both at the Federal and State levels, as well as the structures of the party.

Although some party chieftains have opposed his re-election bid on the ground that Osun West, where Adeoti hailed from should be allowed a shot at the governorship seat, the party has thrown its weight behind the governor and maybe thinking of moving to the West in 2026. Oyetola has very bright chances. Apart from the power of incumbency, the Party Chairman, Prince Gboyega Famodun is his strong ally.

The recent membership registration and revalidation exercise were also to the advantage of the governor, having been at loggerhead with his predecessor during the exercise. His performance and achievements as governor will also be an added advantage. He has also been said to be taking care of party machinery since he became the governor.

There are other major stakeholders who have roles to play in determining who emerges the party candidate.

The former governor has insisted on making sure his successor did not clinch the party ticket, hence, his faction, known as The Osun Progressives, TOP, has been working round the clock to mobilise for their preferred aspirant, Moshood Adeoti. The group is behind the slogan, West Agenda. The group has members cutting across the 332 wards in the state but a recent event has shown that some of their loyalists have been returning to the main party fold. The Minister has in the last few days been going round to mobilise support for Adeoti. According to him, Governor Oyetola has breached his trust and that of his group, hence, he does not deserve a second term.

A major grassroots politician, Omisore is a major power broker, not only in the Osun East Senatorial District but across the state. His supporters across the state, having been part of the revalidation and registration exercise of the APC have pledged their support for the incumbent governor.

Another major stakeholder is Senator Ajibola Basiru, the Senator representing Osun Central Senatorial District, who was with the Minister of Interior before switching camp to that of the governor and has been an advantage to the group which is a major blow to Aregbesola’s faction. His structure across the senatorial district has also moved to the governor’s camp, thereby strengthening Oyetola’s support base.

As the three aspirants slug it out today for the party’s ticket, it is believed that the major contest is between Governor Oyetola and Adeoti with the governor having an edge over the former ADP Governorship candidate.

Richest Man In The World Today 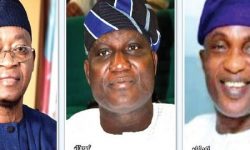