Osun State Governor, Adegboyega Oyetola, has reacted after losing his reelection bid to Senator Ademola Adeleke of the Peoples Democratic Party, stating that the leadership of the All Progressives Congress will respond to the result of Saturday’s governorship election.

The returning officer for the election, Prof Oluwatoyin Ogundipe, announced that Adeleke scored 403,371 votes to defeat the incumbent Governor Gboyega Oyetola, who polled 375,027.

In a statement by the Chief Press Secretary to the governor, Ismail Omipidan, Oyetola said the APC leadership in the state would respond to the result of Saturday’s governorship poll after studying it.

The governor, however, called on his supporters to remain calm and the people of the state to go about their businesses without let or hindrance.

The statement read in part, “Governor Adegboyega Oyetola has taken cognisance of the results of the governorship election in the state as announced by the Independent National Electoral Commission, INEC, on Sunday.

“He, however, noted that the party would be responding appropriately after studying the results and consulting with critical stakeholders of the party. 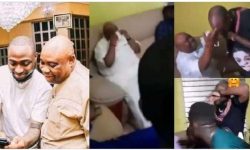