A Nigerian man has shared the story of a friend who asked him to connect him with a female friend but changed his mind after learning about her habits.

The narrator known as @CRawkeen on Twitter, said the he was happy when hus buddie showed interest in the lady because they have something in common.

He informed the guy that that she also smokes and this put him off as he had to reconfirm by asking him via their chat.

When CRawkeen answered affirmatively, the guy read the message but refused to reply. So what he did was to send the lady’s number. But this angered his friend, who then wondered if he was mentally okay.

The post reads; “My friend developed an interest in a female friend of mine. He said I should link him. I said okay, it’s even good, she smokes too,onigbo pade onigbo. He said she dey smoke? I said yes. He read but didn’t reply. So I forwarded the girl’s number to him.He said Jide,se o yawerey?” 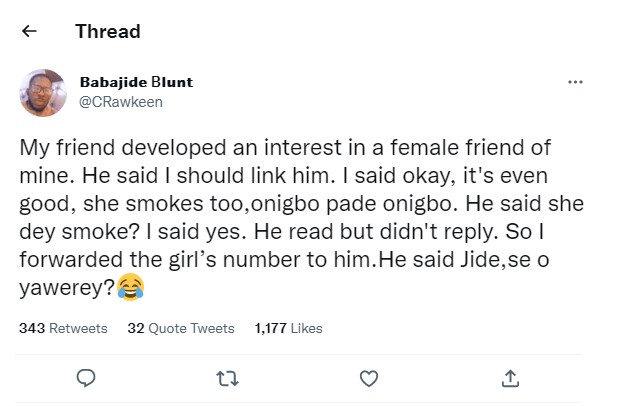 In reaction, @adeska049 said; How come your friends both male and female smoke? That means you too na Baba amugbo 😂 😂 😂

@UrenmaG; He’s a wicked boy. Besides smoking doesn’t tell one’s character if he/she is a devil or not. U don see man wey no dey smoke,drink or club but e go better say na devil be ur friend instead of him?

@itsmuhibah; I’ll still repeat this, men and women aren’t viewed the same way in the society. If you like, don’t be wary of your actions all because of equality and liberty, o tan ni yen.