A 27-year-old Nigerian man identified as Shederack gets called out for allegedly abandoning his pregnant wife for an event planner, 35, who organized his wedding with his wife.

The man reported to be a serial cheat sent his wife out of their home to have their child at his family house after which he moved in with the said mistress.

According to a Facebook user who called out Shederack, he was said to have been abusive towards his wife before opening up about being done with the marriage. 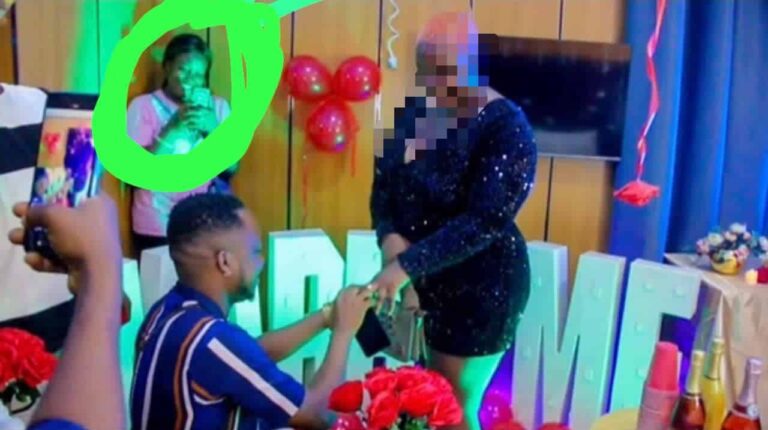 Read the full narration below …

This man in the picture below pushed his pregnant wife out of the house to travel to there place to give birth that he was traveling to Abj, after the wife refused he ordered taxi and sent boys to pack her things out and pushed her away, only for the lady in the picture below to pack in immediately the wife left, the lady which is an event planner.

The lady has been in the picture since they did there engagement and got married, she was also the third party in there marriage, he didn’t even come visit the son when he was born, he came days later or even tried to check up on the pregnant wife, she was in labour pains alone and he couldn’t pick his video calls to see his son just because he was with the event planner by name Stella while the man’s name Shedrack.

The man beats up his pregnant wife at the slightest of her mentioning the ladies name to the extent she was admitted to the hospital for three days because her water broke at 8 months, which she survived, and on several occasions beats up his wife to the extent of breaking phones he bought for her and seizing.

In August, few days after the boy was born the man told his wife his no longer interested in the marriage, his not marrying again, and as we speak both parties are about to separate because the wife said she can’t force things since the man has made his decision.

Pictures below shows scar on the woman’s body after she was beaten by the husband while carrying there son. Pictures below shows prove of the man womanizing and chats with some girls he had things to do with, fact have it that the man is a womanizer who doesn’t tell his wife where he goes to and sleeps out without saying or coming back home, can’t video call the wife because his always with a woman.

This are pictures and proves too as evidences.EVENT PLANNER WEY DEY PLAN SNATCH PEOPLE HUSBAND (DULCECAKESANDEVENTS)🤮🤮🤮🤮🤮🤮 (35 years old Lady fool) and worst of all, this man (Cashmere exchange) in the picture is 27 years old without a single atom of brain poor fool that had no clothes, no house, one slippers no parents and still the wife stayed till he made little money and then decided to misbehave starting from the day he engaged the wife🤮🤮🤮🤮🤮🤮’he would have just canceled everything if he wasn’t interested at first not until after their marriage’ STUPID PEOPLE.”