Vladimir Putin despises any intrusion into his private life, which is shrouded in a lot of mystery.

The Russian President does not speak about his personal affairs and two of his daughters have been kept from the spotlight and are rarely spoken about.

“I have a private life in which I do not permit interference. It must be respected,” he said.

Putin’s current relationship status is a bit of a mystery, amid speculation that he moved on very quickly after separating from his wife of 30 years.

He admitted he had a “habit of leading a bachelor’s life” until it was uprooted by former air hostess Lyudmila Putina.

They met in their home city of Leningrad, now St Petersburg, when a mutual friend invited Putin to see a play along with several girlfriends.

Putin is said to have hidden that he worked as a KGB spy for much of their three-year courtship and they married in July 1983.

The couple had two daughters, Mariya, in April 1985, and Yekaterina, in August 1986, after they had moved to Germany when Putin was stationed as a Soviet spy.

Putin rose up through the ranks of the KGB’s successor, the FSB, then became Boris Yeltsin’s successor when he resigned in 1999.

Lyudmila was reportedly eager to build an active role to match her husband but he kept her in the shadows because he allegedly thought she should “be more modest and not stick out”.

Working 16 and 17-hour days took its toll on his family life and in June 2013 they announced they were separating just weeks before their 30th wedding anniversary.

Appearing on state television after attending a ballet together, Putin admitted that rumours he and his wife no longer lived together were “true” and she had “done with her shift” as Russia’s First Lady.

She had only appeared when required by protocol during his years in power, rarely looking comfortable, and had a controversial TV appearance a few years before because she was not wearing a wedding ring.

“Our marriage is over due to the fact that we barely see each other,” said Lyudmila.

“Vladimir is completely submerged in his work. Our children have grown up, each of them is living her own life… And I truly don’t like publicity.”

Over the years, Putin has been dogged by rumours of an affair, something which he has always denied.

But they were compounded when political rival Alexi Navalny claimed he had wed former Olympic gymnast Alina Kabaeva in a secret ceremony.

Kabaeva won a gold medal for Russia at the Athens Olympics Games in 2004 before retiring from the sport and entering politics.

Once regarded as Russia’s most eligible woman, the only other suitor she has been linked to by the media was a married Georgian policeman but this relationship was said to have petered out by 2005.

Rumours first linked Alina, who is 30 years younger than Putin, romantically to the Russian leader as long ago as 2008 when she was a pro-Kremlin MP.

Many Russians saw her as the reason for the breakup of Putin’s marriage Lyudmila and believed she had become the new Russian First Lady.

The dictator of neighbouring Belarus, Alexander Lukashenko hinted that Putin’s divorce decision came about because Kabaeva “put pressure on the president”.

But Kremlin spokesman Dmitry Peskov denied the claims in a TV interview, saying Putin remained single and dismissed the rumours about his marriage as “gossip, hearsay and assumptions”.

Kabaeva headed a major pro-Kremlin media holding but vanished from view in October 2018 amid unconfirmed suggestions that she had a young family.

There have been frequent reports that Putin is the alleged father of up to five children with Kabaeva, who vanished completely in 2018.

She reportedly gave birth to Putin’s son Dmitry in 2008, before a daughter arrived in 2012, another alleged child in 2015 before the birth of twin boys in 2019.

A Moscow source told The Sun : “Putin is an intensely private man – he has been hiding his two adult daughters under fake IDs for years.

“Even now, though he talks about them occasionally, he never names them.

“If Alina gave birth to his children, her hiding away might be one of the strongest hints pointing to this.”

Around the time of the most recent births she was awarded the the country’s highest civilian medal “For Merit to the Fatherland” by Putin.

Putin is also rumoured to have another secret daughter, alleged love child Luiza Rozova, from an extramarital relationship with cleaner-turned-multimillionaire Svetlana Krivonogikh.

The 18-year-old student said she was loving the “limelight” when her identity was revealed by the opposition media in Russia last year.

As for Putin’s official children, he likes to keep them away from the cameras and little is known about their lives.

Eldest daughter Maria, 36, has a career in medical research and is an expert on dwarfism, according to reports.

She is married to Dutch businessman, Jorrit Faassen, and is believed to be the mother of Putin’s two confirmed grandchildren, who were born in 2012 and 2017.

Meanwhile, Katerina, 35, goes by the family name of her maternal grandmother, Tikhonova, and is a former acrobatic dancer.

She has a degree in physics and mathematic and is now spearheading a major Russian artificial intelligence initiative.

“If I mention ages and names, they would be identified and never left alone.” 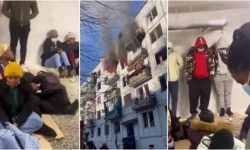 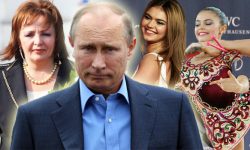