A Nigerian couple’s WhatsApp conversation that surfaced online has stirred a mix of amusement and perplexity.

The man and woman were chatting about how she could not make pap after being instructed by his mother.

He questioned Folake, his lover, about why she was spending so much time in the kitchen, and she responded that she couldn’t make the pap his mother had asked her to make.

The lady explained that she has been struggling in the kitchen to make it but it was not getting thick as the one she made was watery.

The man made jest of his babe’s cooking skills but Folake further said that she could not leave the kitchen until the learns how to do so because it will be embarrassing to tell her lover’s mother that she was unable to prepare pap.

He then advised her to prepare custard, but she revealed that it would also be a challenge because she can’t prepare that either.

Read the chat below: 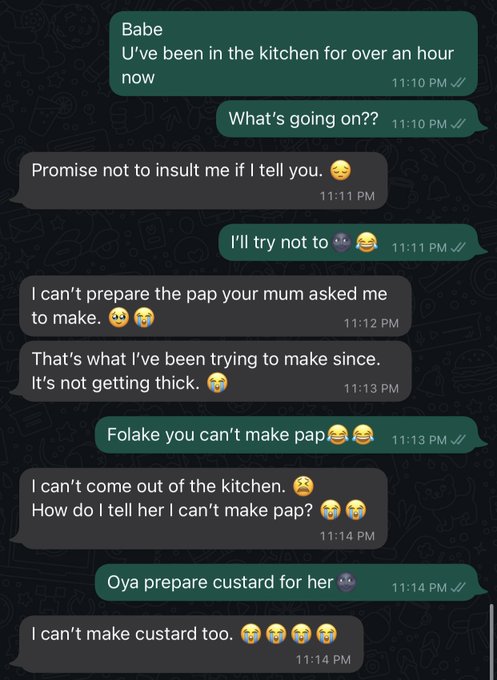 Below are some reactions to the viral conversation.

@Made_In_Waffi; “Prepare custard for her” like say no be same process..😂 It’s either this is staged or the other person sef no sabi prepare am too. Na rubbish dey date rubbish😂

@Abbeby1st; Hehehe! This gen z no go kill me here with laugh😂.

@EngrWise1; Simple trick I learnt from my wife, if e no gree thick, just put am for microwave, less than 1 min, them no burn the pap or custard, e go thick

@adelinespeaks; I can cook very well and very nice but sincerely speaking not knowing how to cook doesn’t make one less a wife material, she might not be brought up cooking, all the guy needs is to help her, Youtube is there to learn and she can do better than he thinks.

@LGTBYA001; i remember my first pap as a kid. me and Dolpson made pap, he no gree thick, omo we pour plenty sugar inside it like that and we started drinking our water pap.

@Sammy24042864; This thing is very simple, what determines the thickness of a pap is from solving stage, if add too much of water before adding the hot water it will not thick at all. That first mixing stage determine the out come whether it will be watery or thick.