Okoolu was said to be a prime suspect in the killing of a graduating student of the Federal Polytechnic, Ede, Hassan Adedeji, last Wednesday, during a bloody clash between some thugs and members of the Oodua Peoples Congress (OPC).

NgNews247 gathered that the Okoolu’s gang has been terrorising Ede and its environ for a very long time.

However, NANS and NAOSS in a statement signed by their Coordinator and President, Comrade Stephen Tegbe and Yusuf Agboola respectively, urged the police to intensify efforts in arresting the killers of the student.

They condemned the killing of the innocent student, describing it as unfortunate.

The statement reads in part: “These known thugs have been orchestrating incessant riot and attacks in the community for long, it has only draw public attention because a student life was lost. Our reports reveal that the perpetrator of this evil act is a group led by one Rasheed Okoolu, who has been terrorising Ede and its environment for long.

“We express our condolences to the family of the deceased. We also charge students of Federal Polytechnic, Ede to be security conscious and stay out of trouble.

“In addendum, we frown at the way security agencies in the state are treating the matter as it shows that it has gotten out of hands. 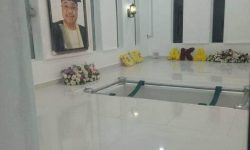