Nigerian singer, BNXN, formerly known as Buju, has been involved in an altercation with men of the Nigeria Police Force.

A video circulating online shows the moment he was having a confrontation with some officers that stopped his car in Ikeja, Lagos state.

BNXN was wearing a white singlet after his clothe had allegedly been torn during a tussle with one of the policeman who entered his Benz.

A passer-by recorded the moment the artiste, his friend and the security agents were charging at each other on a busy road.

The ‘Lenu’ crooner, in a now-deleted tweet, revealed that he spat in the officer’s face after the personnel dragged his clothe, tore it and slapped him.

Meanwhile, a police corporal, Opeyemi Kadiri, was recently dismissed over a video of him assaulting a young man in Lagos State.

In the footage, the armed officer was having an exchange with the victim who challenged him for forcefully searching his phone.

A statement released by Force Spokesperson, Prince Olumuyiwa Adejobi on Friday, said Opeyemi was dismissed after an orderly room trial at the Nigeria Police Force Headquarters in Abuja.

The statement said: “The Nigeria Police Force has dismissed Force No. 509745 Corporal Opeyemi Kadiri attached to Dolphin Divisional Headquarters, Lagos Police Command for gross misconduct, disobedience to lawful order, and assault on a member of the public captured in a viral video on August 3, 2022.

The dismissed officer who, enlisted into the Force on 6th December, 2016, was caught searching a commuter’s phone by the road side contrary to the directives of the Inspector-General of Police, IGP Usman Alkali Baba, psc(+), NPM, fdc, to that effect.

He equally assaulted the commuter who attempted to bring the order to his notice. His dismissal takes effect from today the 12th of August, 2022.

The Police hereby calls on officers and men of the Force to maintain professionalism and civility to members of the public in the discharge of their duties in line with extant laws.” NGNEWS 247 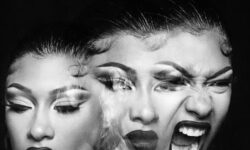