BBNajiaS7: “I’ve been a girl”: Daniella hints on losing her v!rg!n!ty to Khalid (Video)

As the BBNaija season seven reality show continue to get intense, Daniella has given an hint on losing her v!rgin!ty to Khalid at the ongoing reality show.

It would be recalled that Ngnews247 reported that Khalid and Daniella were spotted in a steamy moment some days ago, a move that got fans talking.

Amaka and Phyna also teased Daniella on how protections has been missing at the show despite their low numbers.

Daniella now seems to have confirmed that something went down between her and Khalid.

The young entrepreneur during a conversation with Khalid some hours ago noted how it feels to finally be a woman.

The following conversation ensued between them:

Khalid: How does it feel to finally be a woman?

Daniella: it feels like I’ve been a girl for a real long time

Did Khalid disv!rgin Daniella in the BBNaija house? Fans have reacted to this in different ways.

_olaywmi wrote: Lol in 2 weeks you broke your virginity for someone you just met on a reality tv 😂😂😂😂big cap abeg…..
You have the courage to break it on national tv but couldn’t break it over 20years in private please tell us another lie😂😂😂

Dameanstra wrote: Oga ooo.. You have been a girl for a long time, and it’s now on national tv you had to un-girl yourself. Innocent Danielle in the mud

Techbeliz wrote: I feel she is referring to her period, she said ‘it finally came’, so Khalid asked her how does it be to finally be a woman. That means she has long been expecting to see her period.

Watch Video Of Khalid and Daniella speaking below: 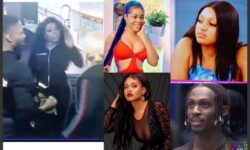 BBNaija: Level One Housemates Come Hard On Chichi For Advising Phyna To Stay Away From Eloswag (Video) #BBNajiaS7: ”So shameless; is this a strategy?” – Reactions to Doyin’s declaration of love for Deji (Video)