Big Brother Naija (2022) week 4 was filled with usual drama which started with the Head of House game won by Eloswag and followed by the intense nomination process where 7 housemates got nominated including two fake housemates and five were placed on possible eviction for viewers to decide their fate.

Here are the five housemates nominated for eviction this week.

Following the nomination process, we set up an online poll for viewers to vote for their favourite housemate among the 5 nominated housemates.

This is how viewers voted;

Likely Housemates to be Evicted

Result from the online poll show that PharmSavi and Kess got the least number of votes from viewers this week and both housemates will likely be evicted from the the Big Brother house during the Sunday live eviction show for week 4.

From the online poll, Daniella, Groovy and Amaka are safe and not in any danger of eviction as they got the highest number of votes. 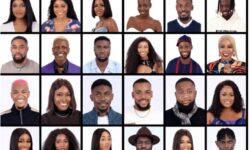 #BBNaija: “Peace Was Never An Option In This House”: Chomzy Blast Phyna For Being A Peacemaker (Video)