#BBNaija: “Peace Was Never An Option In This House”: Chomzy Blast Phyna For Being A Peacemaker (Video)

Information reaching Ngnews 247, Things got heated between housemates at the ongoing BBNaija season seven reality show as Chichi and Diana had to be held back by their colleagues at the reality show.

It would be recalled that the reality show was given a new twist on Sunday night as organisers decide to merge all housemates.

Rather than the previous level one and level two house, housemates now stay in a building and it promises to another dramatic scenes.

Kicking off the dramatic scenes were Chichi and Diana who fought over Deji.

Merging of housemates meant some housemates wouldn’t be able to have a locker to themself as there aren’t enough lockers.

Chi Chi felt jealous about this and didn’t find this funny, eventually degenerating into a fight.

Phyna was one of the housemates holding backing Chichi and Chomzy was not pleased with this.

Reacting to the incident, Chomzy urged Phyna not to indulge in such act. According to her, peace is never an option at the house.

Phyna narrated why she decided to make such a move and its left to be seen if both parties won’t be dragged into a heated conversation. 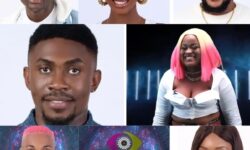