As the BBN show is about to come to an end, viewers are probably wondering who has been victimized the most when it comes to nomination in the house.

The first weeks of the show unveiled level 2 always being up for eviction, so it seems like only level 2 members have the highest nomination.

Phyna is one of the housemates from level 2, that has complained loudly about how frequently she has been up for eviction, it would appear she has been up the most, but calculations prove this wrong.

She has had an equal number of nominations with some other housemates, including a former level 1 housemate. She has been put up for eviction four times because of her perceived strength and the same has happened to Bryann. 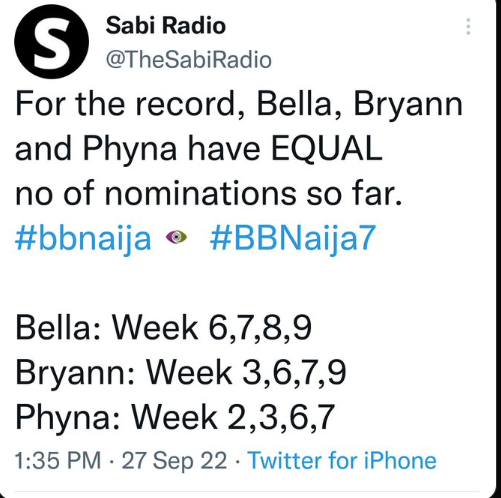 They are not the only ones that had suffered the trauma of eviction fear. Bella too had been nominated 4 times and also went through the same eviction Sunday fear. Clarity is coming on this because some viewers and fans might want to gather pity votes based on misinformation.

The three of them are now finalists and one doesn’t deserve more votes because he/she has been up for eviction the most, they should all be voted based on fan love and merit.