Beauty Tukura Reacts As Amaka and Phyna F!ght Over Groovy

Following Beauty’s exit from the house, Amaka opened up to her best friend, Phyna, about her feelings for Groovy, and in response, Phyna encouraged her to shoot her shot.

During the week, taking her bestie’s advice, Amaka summoned courage and confessed her love for Groovy.

However, while Amaka would have expected Groovy to reciprocate her love, he’s been passing the night on her best friend, Phyna’s, bed ever since she (Amaka) confessed her love to him.

Amaka, who feels betrayed, tells the housemate how Phyna stole Groovy from her, despite knowing she was head over heels in love with him.

In a surprising turn of events, the playful duo, Phyna and Amaka, who joke around the house, were engaged in a heated argument and hurled insults at each other this morning. Watch video Here 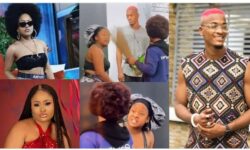 Teddy Ray Cause of Death: What Happened To Teddy Ray?