ASUU Strike Nigeria: Students have commenced mass mobilisation across States, including Lagos, Ilorin and Imo against the continued strike action by the Academic Staff Union of Universities (ASUU) and non-teaching staff unions.

The Nation gathered that students have decided to embark on peaceful march on the streets because there seems to be no end in sight to the ASUU strike, which has entered its third month.

According to fliers seen by The Nation trending on social media platforms, students in Lagos will gather at University Road Junction Yaba on Monday by 8:00am for the action.

In Kwara, students will gather at the University of Ilorin gate on Tuesday.

Banners with inscriptions like ‘End ASUU strike now’, and ‘No to incessant strikes’, among others have since gone viral.

The Federal Government and the striking lecturers would resume talks this week with a view to ending the prolonged closure of public universities.

The lecturers are pressing home their demands which include funding for the revitalisation of public universities, earned academic allowances, University Transparency Accountability Solution (UTAS), and payment of promotion arrears.

They first embarked on a four-week strike before extending it for another eight weeks to enable the Federal Government address issues in concrete terms.

ASUU had also accused the government of poor commitment to the payment of earned academic allowance; the continued use of the Integrated Personnel Payroll Information System (IPPIS) and refusal to adopt the Universities Transparency and Accountability Solution (UTAS) among others. 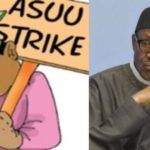